Illegal traffickers of fish and wildlife are singing the blues… the “Smuggler’s Blues”! The Florida Fish and Wildlife Conservation Commission (FWC) has developed a Port Investigations Program to combat the illegal trade of fish and wildlife through Florida’s airports, seaports, commercial shipping facilities, highway agriculture inspection stations and cold storage facilities. This program is made up of six FWC Port Investigators working in conjunction with five FWC Port K-9 Officers strategically placed in high traffic areas of the state of Florida. The purpose of this specialized group of officers is to identify and investigate the illegal commercialization of fish and wildlife in the state of Florida.

History
Florida’s subtropical climate, combined with the easy accessibility of international travel, has made Florida an epicenter for both the legal and illegal trade of fish and wildlife. The FWC historically targeted the illegal wildlife trade through airports and seaports on a part-time basis but could not keep up with the sheer volume of fish and wildlife shipments coming into and out of the state of Florida. In 2011, the FWC developed the first full-time Port Investigations position as a trial in the Orlando area of Central Florida. FWC Capt. Randy Bowlin related, “We were developing the port program from scratch and had to figure out the ins and outs of the shipping and transportation industry.” The new Port Investigator found out quickly that developing partnerships with airports, airlines, seaports, commercial shipping companies and port law enforcement agencies were crucial to success. “Our Port Investigator had to befriend the two largest shipping companies in the world – both private corporations- in order to be invited into their facilities to conduct parcel inspections. He was able to partner with the Orange County Sheriff’s Office Parcel Unit which is one of the premier narcotics interdiction units in the United States to learn about the full particulars of parcel interdiction,” said Bowlin. Working with airports and the Transportation Security Administration (TSA) also proved to be an important piece of the program. “Receiving required training from TSA and procuring badging media is crucial to the program’s success,” advised Bowlin.

The FWC Port Investigator became successful in the interception of illegal fish and wildlife and developed large scale criminal investigations involving the commercialization of protected species. Due to this success, the Port Investigations Program grew to six positions covering the busiest airports and seaports in the state of Florida.

Port K-9 Program
As FWC’s Port Investigations program grew, the development of the Port K-9 program became an integral tool in the identification of fish and wildlife in unmarked parcels and shipments. “The Port K-9 Officers have become a great asset to our Port Investigators. The trained K-9’s can easily identify shipments of fish or wildlife and develop added probable cause of a violation,” stated Bowlin.

The FWC selects dogs for the Port K-9 program that have high energy, the proper demeanor and are non-aggressive. All dogs are acquired through donations or found at animal shelters. Each FWC Port K-9 Officer attends the United States Department of Agriculture K-9 Academy in Newnan, Georgia. The training lasts 10 weeks and consists of detection and obedience training. All FWC Port K-9s are trained in the detection of conch, lobster, reptiles, ivory, rhino horns, and saltwater for seafood and tropical fish.  All FWC K-9s are kept at the home of their respective handler and receive a continuous training requirement of eight hours a week.

Success Stories
During the infancy of the FWC’s Port Investigations Program, several large-scale investigations and arrests were made, proving the effectiveness of the newly created program. The first case gained national media attention as “Snakes on a Plane.” The FWC partnered with the United States Fish and Wildlife Service (USFWS) and the United State Customs and Border Patrol (CBP) to develop information about an individual suspected of smuggling reptiles out of Orlando International Airport to Brazil. The team located the individual as he was preparing for departure from Orlando. An inspection of his checked luggage revealed nothing of suspicion at first glance – just clothing, souvenirs and electronic equipment. The team of investigators located indicators of tampered speakers inside the man’s luggage. The speakers were taken apart and more than $6,000 worth of prized snakes were hidden inside. The resident of Brazil was arrested and federally charged for smuggling wildlife. 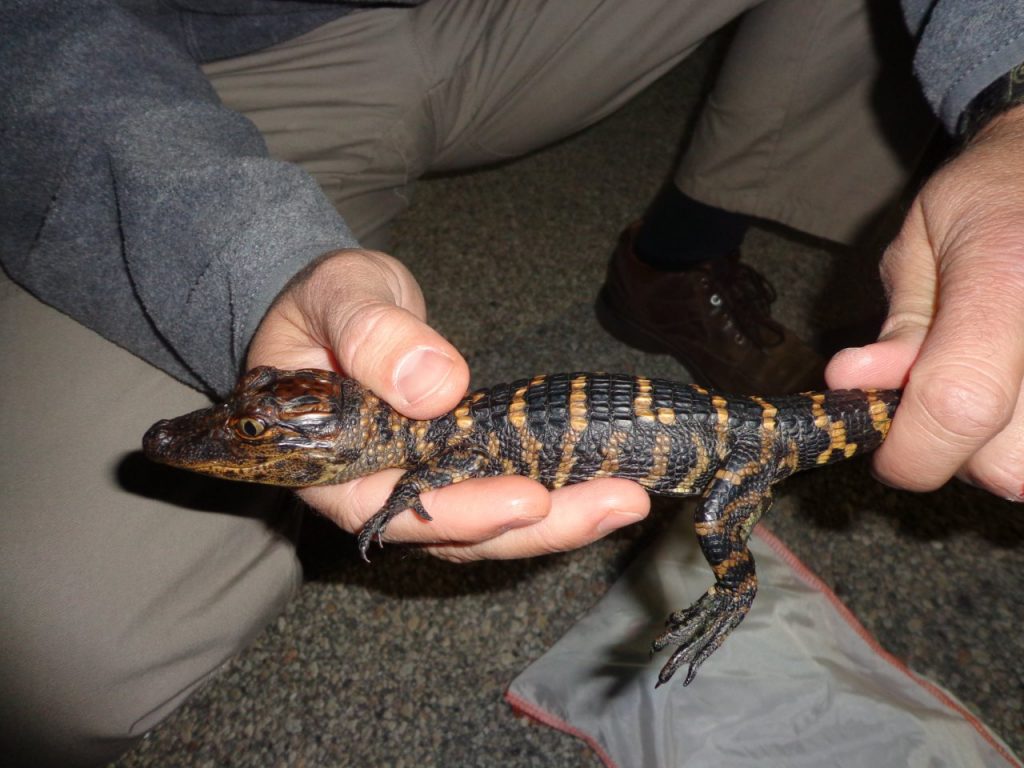 The second noteworthy investigation involved multi-agency investigation that spanned more than four years with the USFWS and the United States Secret Service (USSS). It began when an FWC Port Investigator intercepted four shipments of live baby alligators that were being shipped out of a commercial shipping facility in the Orlando area. The investigator suspected that the shipments were from a wholesale pet dealer and decided to target and monitor subsequent shipments from the dealer. The FWC documented more than 200 state wildlife violations and partnered with the USFWS and USSS as the investigation led to several federal violations. The team conducted a controlled covert purchase of illegal reptiles from the business and discovered that not only was dealer committing wildlife crimes but was committing an enormous amount of fraud as well. Investigators discovered that the pet dealer was stealing the identity of many customers and creating fictitious business shipping accounts with national parcel shipping companies. The pet dealer was defrauding the shipping companies and pocketing 100% of the shipping charges instead of paying the shipping companies their fees. In total, more than $1 million in fraud was committed! The pet dealer was considered the biggest defrauder in the history of one of the shipping companies. Two individuals from the pet dealer’s business were arrested and federally charged for violations including fraud, aggravated identity theft and Lacy Act violations for the illegal trafficking of wildlife. This was a great investigation that all started from an single inspection at a parcel facility.

FWC’s Port Investigations Program started out as one investigator and has grown into an 11-person team over the course of seven years. The unit has become successful at building relationships with ports, commercial shipping companies and state and federal law enforcement partners.  FWC’s Colonel Curtis Brown sums up the Port Investigations Program by stating, ““I’m extremely proud of our Port Investigations Program and the work they are doing to combat smuggling of fish and wildlife.  The program serves as our first line of defense against smuggled resources such as live rock and corals, invasive species, endangered fish and wildlife, venomous reptiles, etc.  We have been very fortunate to have received tremendous support for the program from the FWC Commission, Governor Scott and the Florida Legislature.”

Personnel
Select an officer with strong networking skills that can build a program from scratch. Working well with others is a must as there will be many opportunities to form partnerships and build trust among airport authorities and commercial shipping companies.

Relationships
Meet with your airport/seaport authorities and shipping companies’ security managers to explain the importance of a port investigations program, public safety aspect and the species that your agency is trying to protect. Create relationships with local, state and federal partners working in these locations, as they will facilitate access into these secure areas.