Any law enforcement officer not scared of telling the truth will admit that most hate crimes are hoaxes. That doesn’t mean there aren’t real hate crimes but anyone that has ever had to investigate them knows that the majority simply aren’t true. For whatever reason, there are some people that think they don’t get enough attention and there isn’t enough hate in the world so it has to be made up.

That is why every cop I know rolled their eyes two weeks ago when Empire actor Jussie Smollett told TMZ that not only was he mugged in Chicago, on a night that was colder than Antarctica, but that the alleged suspects called him a racial name, a homophobic slur and yelled “this is MAGA country”……IN CHICAGO!

Maybe it happened….maybe it didn’t and while we were all thinking the same thing, the last thing law enforcement wants to do is get something like this wrong so we tend to take our time with these issues.  Too bad the media doesn’t play by the same rules. 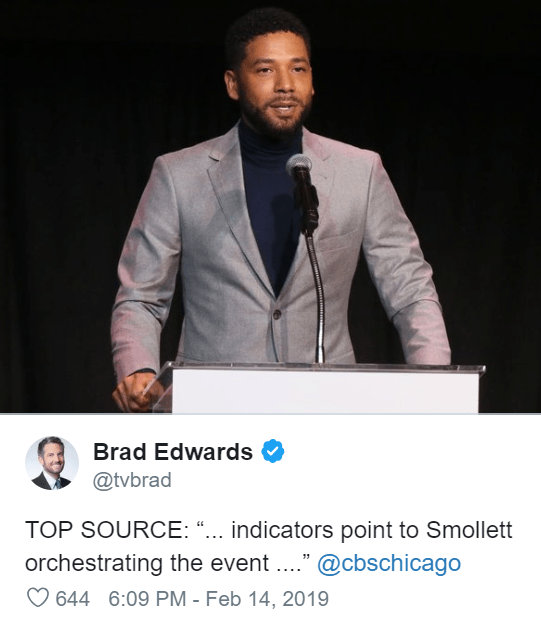 I stopped watching Empire a few years ago when they ran out of good story lines and started bashing cops. After all, the problem isn’t criminals or liars but trigger happy racist cops. Never mind that there is not any statistical data or researcher in their right mind that agrees with the whole “cops are trying to murder blacks” routine but that didn’t stop Empire from pushing that agenda.

Oh well, who cares, it’s their show and they can do what they want and I have the power to turn the channel, so I did.

Flash forward a couple of years and Smollett, who is black and openly gay, claims this horrendous crime happened to him, while he was walking home from Subway. While I was impressed that throughout this beating, which included someone placing a noose on his neck and pouring bleach on him, that he held on to his Tuna Sandwich, personally, only the Steak & Cheese, would have been worth that fight but then again, what do I know?

Well I do know that cops in general are really good at their jobs. Maybe there is an advantage to being accused of being racist hillbillies on lackluster drama shows that should have never gone past the second season?

And that advantage is that unknown actors think they can outsmart the Chicago Police Department.

In the week following Smollett’s alleged attack, police pieced together his walking route to and from Subway by using surveillance cameras, which happen to be plentiful in the murder capital of the world. All but 60 seconds was observed and Smollett claimed that it was in those 60 seconds that the Trump Supporters emerged, bleach and noose in hand, and went to town on him. Shortly after, police released a grainy image of two men walking near the area. Smollett was certain those were the suspects.

Which is why law enforcement raised their eyebrows when Smollett refused to give his cell phone to authorities when requested.  It came days later, after Smollett redacted information including cell phone numbers.

Remember what I said about smart cops?

Sources indicate that Chicago Police were extremely interested when Smollett denied the call log to them during the investigation. According to sources, Smollett essentially did the job for the investigators by removing certain numbers. Police subpoenaed the phone records and simply looked at the very numbers that Smollett had held back.

According to the American Thinker, “His own tampering with the call log helped police narrow down which calls were important and who might have assisted in the hoax.”

Police narrowed the numbers to two men, both from Nigeria, that went there following the alleged attack. When they arrived back to Chicago this week, police were waiting.

Both men have appeared as extras on Empire and both know Smollett according to their attorney, Gloria Schmidt.

Courtesy: Daily Mail. Two Men that the police have detained as persons of interest.

So here we are. The media has stopped talking about this alleged hate crime that involved Trump Supporters. Smollett says he is “pissed off” that some don’t believe him.

By the time you are reading this, you will probably know more and sources indicate that this case will break wide open in the hours to come.

For now, we have a choice.

President Donald Trump Fans waited outside a Subway in sub-freezing temperatures with bleach and a noose in hand until a relatively unknown actor from a show that Trump Fans likely don’t watch shows up and as Smollett told Good Morning America, “…..You don’t even want to see the truth.”

Jussie Smollett made everything up to manufacture the idea that anyone even cares that he is a black, gay actor that hates President Trump.

Unlike the mainstream media that used an uncorroborated story and pushed it as if it were the gospel by using phrases like “epidemic of hate crimes” and emotionally charged language to make claims that anyone that supports the President of the United States was a racist hate monger, we will wait and see.

We will wait and let the Chicago Police Department do their job and we will wait for the entire truth to emerge and we will remember what Jussie Smollett once said…….”Frauds are everywhere Y’all….” 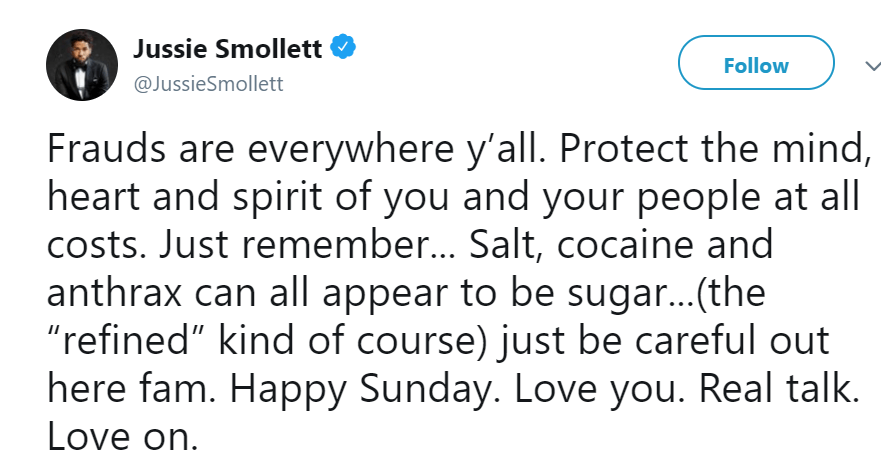