The bond connecting peace officers is our common fight to take on adversaries of the badge and everything they represent. It is a shield which forges through carnage to secure safety for citizens.

As we combat those who harm others physically, emotionally, and economically, we do so with like-minded professionals. We work together as teammates regardless of schedule, shift, or jurisdiction.

When our true goal is public safety, not individual feathers in our cap, the synergy illuminates light in darkness—a constant in the sea of humanity gone foul.

A tight-knit group—among other law enforcement professionals—are those we call “partners.” Our partners might be peers who work the same shift or squad.

Admittedly, there are personality differences preventing a tight bond with all. However, in general, these are the people we go to battle with. We fight crime with them using the best our organizations have to offer. At the end of the shift, we high five, backslap, fist-bump, or otherwise verbalize victory over another day.

Yet there are also those we simply call “partner.” The singular term used for a select few. In my career I labeled six individuals as such. Our laughter was frequent and conversations were safe. We exercised catharsis—unfiltered communication—in almost every dialogue. When catharsis was exercised, there was no fear of reprisal, regardless of rank.

I had the privilege to work in a small, five-person Special Investigations Unit (SIU) for 10 years during my career, first as a detective and then a sergeant. We had some of the loudest, cathartic sessions behind closed doors. Oftentimes those working outside our office said the walls appeared pressurized as they expanded like a balloon being filled to capacity, but they never popped!

The link I experienced with each partner was a shared judgment in philosophy on how to take calculated risks in pursuing crooks. We were not always of one mind, but we had one heart.

At the end of every conversation, we stacked hands and pursued the bad guys with precise calculation and a touch of reckless abandon. The people in our office were indeed my partners—plural—but a few of them became a lifelong professional partner—singular.

The link I experienced with each partner was a shared judgment in philosophy on how to take calculated risks in pursuing crooks. We were not always of one mind, but we had one heart. The cathartic process in working through our differences and then catching the fish—big and small—allowed me to reap rewards for which I am grateful. Moreover, I know our community was better served because of it.

As a result of the Gulf War, the Iraq War, Operation Enduring Freedom (War in Afghanistan) and the ongoing global War on Terror (regardless of what politicians call it), many former military service members entering civilian law enforcement have combat experience. With rare exceptions, they have become some of the finest police officers I have seen in the past 35 years. I tip my cap to each one of them.

I am especially thankful for a lifelong professional partner, Detective Bob Gallaugher, who was also a sergeant major in the USMC Reserves. He was activated and deployed by the Corps during Desert Shield and Desert Storm in order to free Kuwait from the clutches of Iraq and then dictator, Saddam Hussein.

Years later Bob was activated for deployment during the Iraq War. He had been sick but still reported to receive his medical inoculations in preparation for deployment.

Later in the day after receiving his shots, we (police department) received a 911 call from Bob’s home. Our officers responded and found Bob asphyxiated in his vomit caused by the illness. Responding officers performed lifesaving efforts but to no avail. He was transported to the hospital where he was pronounced dead. 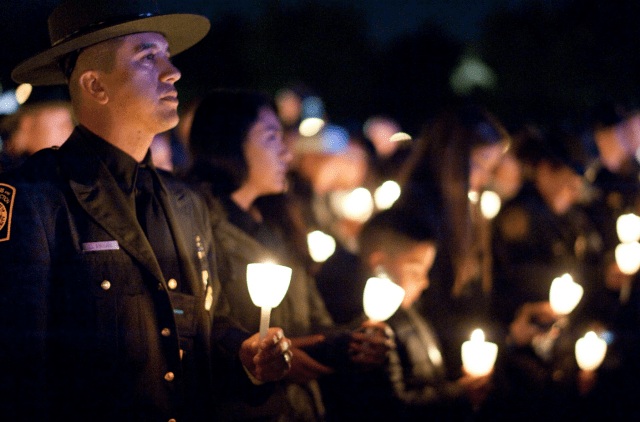 Another partner and I had the regrettable duty of notifying his wife and two sons. My heart mourned for them as I witnessed their reaction to the news, especially his boys. Instead of seeing Bob deployed for the Iraq War, we buried him. The events were so sudden, unexpected, surreal, and sad.

I encourage partners everywhere to remember the true enemy is outside the organization. Stack hands in mutual agreement to fight side by side and appreciate the sacrifice made by each person on the team.

I was grateful for the privilege of sharing stories of my partner at his funeral. I am thankful that Bob knew how much I appreciated our relationship before that tragic day.

May I encourage partners everywhere to remember the true enemy is outside the organization. Stack hands in mutual agreement to fight side by side and appreciate the sacrifice made by each person on the team. Five team members working in unison will accomplish more than 10 people working independently. If you are in a position to exercise cathartic communication, do so. But it only works when pride is checked at the door and individual accomplishments are shelved. If you have that relationship with a partner or two, you are indeed fortunate. If you have it with more, you are in possession of rare treasure. Let them know!