In a case of “damned if you do, damned if you don’t,” I was bothered when reporting on the termination of Officer Charles Starks of the Little Rock Police Department this week. (He has 10 days to appeal his firing.)

When reviewing the fatal shooting, which eventually led to the dismissal, I reflected on a similar story that had a much different outcome, that of the late Officer Amy Caprio of the Baltimore County Police Department.

Both officers encountered suspects involved in felony crimes. Each officer confronted the felon who chose to use a vehicle as a weapon. Starks fired his duty weapon through the windshield and killed his attacker, Bradley Blackshire, 30.

Caprio eventually fired her weapon (reports indicate one round, but the video sounded like a double tap), yet it was too late. Her assailant ran her down and she was killed. Actually, let’s use the correct terminology; she was murdered. Her murderer, Dawnta Harris, 17, was found guilty and is scheduled to be sentenced in July.

Race as a Focal Point

I hate when race becomes the focal point in a news story related to an officer involved shooting. I can safely say that race is not a factor with 99 percent of the cops I’ve known for the past 37 years. When it comes to character and ethics, I’ll stack law enforcement up against any other industry. Crooks come in every color. Nevertheless, plastered in every publication covering the Starks story was “white” officer shoots “black” suspect.

Many journalists continue to refer to the circumstances as “unarmed black man,” completely ignoring the fact that a 3000 lb. automobile is a weapon. If you disagree, ask (white police officer) Amy Caprio. … Oh, never mind, you can’t, she was killed by an “unarmed” (black) suspect. I put their ethnicity in parenthesis since it was never a hinge point in the story. Why not? I guess it did not fit the anti-police narrative. So let’s move on. 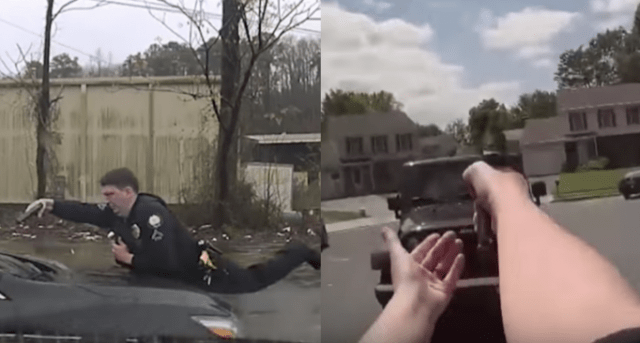 Every officer involved shooting is different. Regardless of similarities, there are nuances that vary from one case to another. Therefore, I fully acknowledge that Caprio and Starks cases contain differences. Yet each officer believed peril was imminent. One fired his weapon and saved his life, the other fired too late and was murdered.

I am not offering criticism on either. Quite the contrary. I have great admiration and respect for each one because they put the uniform on, pinned the badge in place, and swore an oath to uphold the law. However, I want to remain observant and factual.

The incident that led to Officer Caprio’s murder began when she stumbled upon a burglary in progress at approximately 2 p.m. on May 21, 2018, while she was investigating a report of a suspicious vehicle, Law Officer previously reported.

Police later discovered damage to a patio door at one residence in the area.

Dawnta Harris admitted to investigators that he was driving a Jeep Wrangler, and that he was waiting in the vehicle while his three accomplices were committing a residential burglary.

When Officer Caprio arrived in the area, Harris said he attempted to flee, but ended up in a cul-de-sac.

Consequently, Officer Caprio pursued him, then exited her patrol vehicle and demanded that Harris get out of the Jeep.

However, Harris said he opened the driver’s door partway, but that he closed the door again, and “drove at the officer.”

Tony Kurek said that his adult son was outside in the yard and witnessed the officer confronting the occupants inside a Jeep with her weapon drawn.

Another neighbor, Dahle Amendt, said he was inside his home when heard the officer issuing commands to someone outside.

Kurek said that his son heard the same sound.

“The next thing he heard was a pop, and he saw the Jeep take off and run right over her,” he recounted.

“She basically landed almost in front of my mailbox,” Kurek said.

The Jeep fled the scene, leaving skid marks on the street next to the dying officer.

Officer Caprio, 29, who had been on the police force for almost four years, was bleeding profusely when she was rushed to a nearby hospital.

She was pronounced dead at 2:50 p.m., less than an hour after she tried to stop Harris, WJZ reported.

Officer Starks was responding to a call Feb. 22, 2019 after a detective confirmed that the car Bradley Blackshire was driving was stolen. Due to circumstances—crazy things happen in police work—Starks found himself in a vulnerable position, with weapon drawn, ordering the suspect out of the car. But Blackshire refused to comply on multiple occasions.

When the vehicle being operated by Blackshire began to move toward Starks, he backed away. Nevertheless, the left front quarter panel struck him so he opened fire. Consequently, as the continuing action unfolds, Starks is laid out on the hood of the vehicle. As a result, he continued to fire until the suspect was no longer a threat.

Had Starks been killed, he’d be a hero. But he lived, so there is a different outcome!

Sources have disclosed that each person in Starks’ chain of command—from sergeant to assistant chief—disagree with the decision to terminate him. Nevertheless, Chief Keith Humphrey is firing him for violating General Order 303. II.E.2, which says, “Officers will not voluntarily place themselves in a position in front of an oncoming vehicle, where deadly force is the probable outcome. When confronted by an oncoming vehicle, officers will move out of its path, if possible, rather than fire at the vehicle.”

The Little Rock FOP is supporting Officer Starks through the process.

Officer Caprio died a hero’s death. I wasn’t in her shoes, so I’m not about to criticize anything she did or didn’t do. Lord knows I made plenty of perilous decisions during my career. That is what sheepdogs do; they put themselves between the sheep and the wolves—and yes, at times it looks cavalier, but it is still done with the best intentions.

Chief Humphrey has labeled Officer Starks a “goat.” Not literally of course, but he’s firing him, so he’s essentially placing him in the category of “rabid sheepdog” who needs to be “put down.”

Shame on you Chief Humphrey—and any politician(s) who influenced your decision—for failing to stand by your officer in his time of need. There is nothing courageous about your leadership. Quite honestly, it’s pandering to people who’ve never confronted hostile actions by dangerous people who refuse to submit their will to authorities.

As far as I’m concerned, until you’ve experienced the level of desperation displayed by many people during the arrest process, your opinion on these matters is without a foundation. It is no different than a novice making a judgment call on a surgeon who lost a patient during emergency surgery.

Police work is a high-risk business. It’s messy and when police officers are forced to overcome resistance with greater force, it NEVER looks pretty. Fortunately, the prosecutor in Starks’ case recognized that.

Furthermore, decisions made by the Chief Humphrey’s of the world will lead to more injuries and deaths when well-intentioned cops hesitate to defend their safety fearing termination or prosecution.

Cops need to make split second decisions based upon the fluid and violent nature of the job. The disparate results are conclusive: Officer Charles Starks has been damned while Officer Amy Caprio is dead.

The post Damned If You Do, Dead If You Don’t appeared first on Law Officer.