BOYNTON BEACH, Fla. — What are the chances that a pair of career cops living near one another, but having never met, are actually half-brothers? It’s highly unlikely, yet it happened. Two Florida law enforcement officers are more than just brothers in blue, but brothers by blood as well.

A few years ago I attended a law enforcement retreat in the Blue Ridge Mountains. While there, I met Eric Reynolds of the Boynton Beach Police Department. Like all the guys at this retreat, I held Eric in high regard due to the professional tribulations he incurred.

Now, fast-forward a few years, and suddenly my professional acquaintance is making headline news. His “feel-good” story is getting national attention, so I gave him a call.

Eric received an email last month from a man named David Stull, a sergeant with the Orange County Sheriff’s Office in Central Florida.

“Eric, Good morning, my name is David Stull (Dave). According to 23andMe, we are half brothers. I was adopted as an infant and have very little knowledge of my family history, so I have no way of knowing the validity of this. But, if genetics dictate our lives, there may be something to it. We both live in Florida and are apparently both cops. I don’t want to push this on you, in fact, I’m not yet sure how far I want to go with it. But, if you are interested in communicating, reply to this message. If not, no hard feelings and I won’t bother you any further. Thanks, Dave”

Eric also used 23andMe, a DNA genetic testing company, three years ago to learn more about his family’s ancestry, but he never imagined this.

“It was pretty stressful, it was emotional, it was sad because I didn’t know the story of his history,” said Eric at a news conference last week. “We’re still learning so much about each other. It’s amazing.”

“I was expecting to see cousins and stuff like that. The top of the list said half brother. I hadn’t considered that possibility,” said Dave. “It just kind of blew up from there.”

Eric and Dave met for the first time on July 20.

“My wife is always like, are you texting your brother again?” said Dave when speaking to local reporters. “Of course, because we have 50 years to make up for it.”

“We’re both retiring soon so we’ll have plenty of time to catch up,” said Eric. “I have a chapter, he has a chapter, now we have a third chapter to work on.”

Eric and David went 50 years without knowing they were brothers. A DNA test with @23andMe brought them together! One is a @BBPD officer and the other is an @OrangeCoSheriff deputy. This is the kind of story that makes you smile.
FULL STORY tonight @WPTV https://t.co/b4tgi0YMyy pic.twitter.com/Fnm7OEReT0

“Good morning, my name is David Stull. According to @23andMe, we're half-brothers." The start of an email #BBPD Officer Eric Reynolds got from the brother he never knew he had – an @OrangeCoSheriff sergeant! More on this incredible story of brotherhood tomorrow. pic.twitter.com/U6zwpWiDQq

Eric said he lives about 2 ½ hours from Dave, and the two have made a fantastic connection.

“To hang out with someone who has the same hands as you is weird,” Eric said.

The two men who share the same biological father and as well as their profession, have also served as bicycle patrol officers, among other assignments during their respective career as a cop.

Dave was adopted by a military family and was their only child. He lost his adopted mother about 18 years ago due to Alzheimer’s, while his adopted father passed away last year, Eric said during our phone conversation. So discovering a host of new family members has been a blessing.

Their father was never aware of Dave’s existence. When Eric gave him the news, the reaction was what you might expect, “Wait a minute … what?” 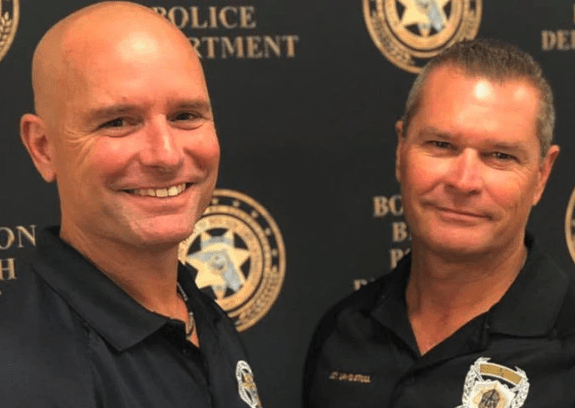 Eric’s mother is a retired Miami-Dade homicide detective. As the two new brothers compared notes, it appears that her path crossed with Dave’s during one of the hurricane operations.

Their story is gaining publicity far and wide. Eric shared the various news publications that have covered the story thus far, including as far away as the Norwegian press.

Moreover, Wednesday morning the brothers will be featured on “Fox and Friends.”

While discovering new relationships has been a whirlwind, it has been a welcomed addition in their lives. Eric plans to retire from Boynton Beach Police Department later this year, and pick Dave’s brain and expertise as a man who knows a thing or two about travel trailers.

Until then, they will hold the Thin Blue Line and know they each have a biological brother they can count on as back-up.