FALMOUTH, Mass. – Massachusetts investigators have accused a Cape Cod man of trying to injure squirrels in a public park by baiting at least one razor blade with peanut butter.

He has been charged with animal cruelty, reckless behavior and injuries to trees, the Falmouth Department of Marine and Environmental Services said Saturday. 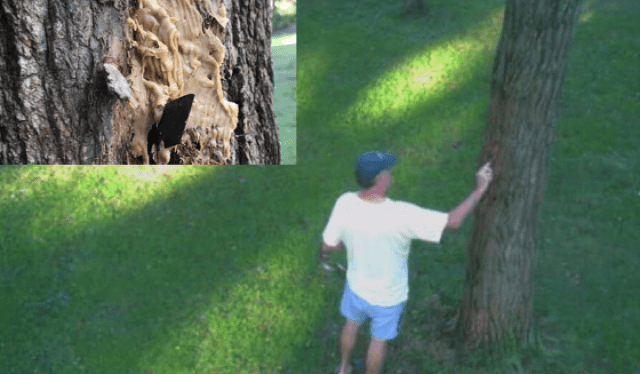 M. Brian McGrath, 43, of Falmouth, was charged with animal cruelty and other crimes Saturday, investigators said. Authorities collected evidence of an individual regularly baiting a razor blade with peanut butter to attract squirrels in Goodwill Park on Cape Cod. (Falmouth Department of Marine and Environmental Services)

Environmental officers went to Goodwill Park in Falmouth after receiving a tip and launching an investigation. The agency said the disturbed activity had been ongoing.

“During the investigation, officers collected evidence of an individual regularly baiting a razor blade with peanut butter in an attempt to attract wildlife within the park,” the agency reported in a news release.

The news release said squirrels came in contact with a razor blade in a tree that McGrath had been observed baiting by officers conducting surveillance.

Investigators didn’t elaborate on what happened to the squirrels.