GALLIA COUNTY, Ohio – A manhunt was underway Sunday for four inmates who escaped from an Ohio jail after overpowering two correctional officers with a homemade weapon, authorities said.

The men who broke out of the Gallia County Jail in Gallipolis around 12:14 a.m. Sunday also had help from the outside, Sheriff Matt Champlin said.

“The four inmates were successful in forcing open a secured door and escaped,” he said, according to Fox News. 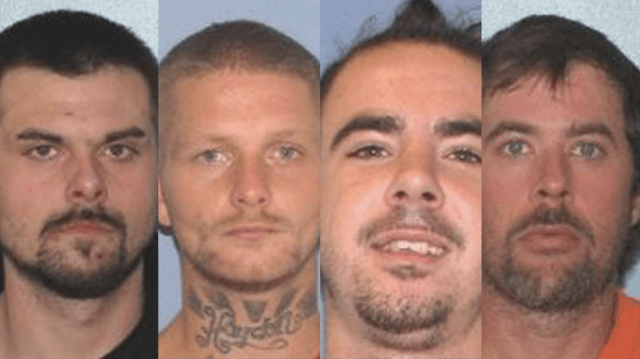 “Deputies have established that the inmates had assistance in escaping from at least one individual on the outside,” said Champlin.

“All of the inmates should be considered extremely dangerous,” he said.

The escape was Martin’s second this month.

On Sept. 3 Martin and Jesse Partlow, 30, were in a jail transport vehicle when they escaped, WSAZ-TV reported.

Both were captured the next day after a brief standoff, the station reported. They were found hiding in the crawl space of a home on a state road near the Village of Cheshire.

Authorities issued an alert after the escape saying both men were wearing orange jail garb and leg shackles.

A 30-year-old woman was arrested at the home on suspicion of aiding Martin and Partlow in their attempt to elude law enforcement, the Gallipolis Daily Tribune reported.

Reports did not indicate current custodial charges against the four inmates.

The post Four inmates on the run after overpowering correctional officers appeared first on Law Officer.