NEW YORK – A NYPD officer was arrested Friday in connection with a plot to hire a hitman to kill her ex-husband and her boyfriend’s teen daughter, prosecutors said.

Valerie Cincinelli, 34, of Long Island, was immediately suspended without pay after being charged with conspiracy to commit murder. Moreover, the NYPD officer was taken into custody after the FBI planned an elaborate ruse where an agent posed as a hitman and faked the hit on her estranged spouse, Isaiah Carvalho Jr.

The murders were supposed to be carried out last weekend, according to reports.

The FBI and the NYPD’s Internal Affairs division are involved in the investigation into the alleged murder-for-hire.

The FBI was tipped off by Cincinelli’s boyfriend when she reportedly added his daughter to the hit list, the New York Daily News reported, citing prosecutors.

The boyfriend, whose name was not released, wore a recording device when meeting with Cincinelli and let authorities record his phone calls, according to court documents.

In February, it’s alleged, the NYPD officer withdrew $7,000 from her bank account and had the boyfriend convert it to gold coins to pay the hitman. After expressing concerns in early May about the timing of the slayings, she is said to have told her boyfriend “to have the hitman kill Jan Doe over the weekend and then wait a week or a month to kill John Doe.”

She also requested that the murder not take place in “the hood” or “the ghetto” so it wouldn’t look suspicious, the New York Post reported.

At one point, Cincinelli was recorded asking her boyfriend, “Did you do it yet?”, according to a law-enforcement source familiar with the case.

While discussing the daughter, the once-decorated cop allegedly said: “Run her the f*** over, how about that.” A source told the Post that Cincinelli wanted the daughter killed because she was “getting in the way.”

Police went to Cincinelli’s home Friday to inform her that Carvalho had been killed.

Cincinelli cried “fake tears” during the meeting, a source said.

After the officer left, the boyfriend, who was also there, recorded Cincinelli discussing “what her alibi would be if she were to be questioned by the police,” court papers say.

He also showed her a text message from the feds that he claimed came from the hitman, which included a staged photograph of her estranged husband “appearing dead in his car,” court papers say. Furthermore, there were instructions to send $3,000 to kill the girl, according to the report. 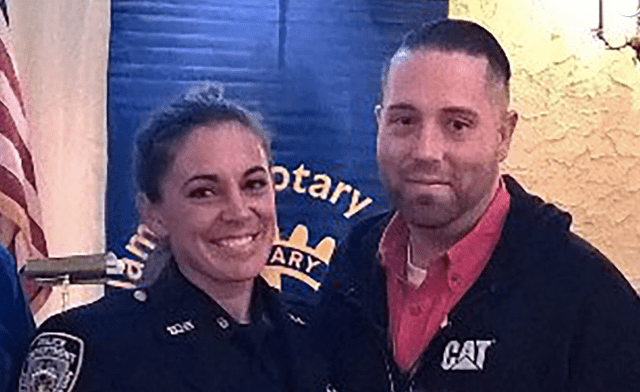 “The evidence in this case is overwhelming,” Brooklyn US Attorney Richard Donoghue said in legal documents, as prosecutors successfully argued for Cincinelli to be held without bail.

She previously worked in the department’s 106th Precinct in Queens before she was placed on modified duty in 2017 due to a series of domestic violence incidents involving the boyfriend and Carvalho, the news station reported.

Carvalho filed for divorce from Cincinelli last year. His lawyer Erika Sakol said the murder for hire plot was a complete shock, and that there were no outward signs of extreme hatred in the relationship.

The couple was working out their differences, Sakol said. “We thought we’d be settled before the trial,” she said. “It seems a little surreal.”

“Isiah is extremely thankful for the work of law enforcement,” Sakol said. “Without their diligent efforts, who knew what would happen?”

Cincinelli’s father, who lives in Virginia, told the New York Post the allegations against her were “nonsense” and said someone she previously dated “made an allegation against her before that she tried to kill him.”

“They were married, they have a kid together and then they got divorced,” he said of his daughter and her ex-husband. “There is no way on the planet my daughter would have someone try to murder him. That’s nonsense!”

A team of FBI agents spent about 90 minutes searching her house Friday afternoon, with one carrying a cardboard box when they left with a man carrying a sledgehammer and pry bar.

She looked like she’d been crying and said only “Yes, ma’am” to a series of procedural questions from the judge.

Prosecutor Catherine Mirabile said she used her cell phone to perpetrate the alleged plot and an FBI agent executed a search warrant by holding the device in front of Cincinelli’s face to unlock it using facial-recognition technology.

Federal defender Tracey Gaffey argued for Cincinelli’s release on bond without addressing her guilt or innocence, but Judge Anne Shield denied the request, saying, “There is very strong evidence of guilt of the crimes of trying to get these two individuals murdered.”

Cicinelli is being held without bail. The NYPD officer faces up to 10 years in prison.