Wesley Wise and his brother Quinton Wise gave a man 50 bucks and $100 worth of crack to throw an incendiary device through the kitchen window of a female officer’s southwest Atlanta home, Atlanta police Maj. Michael O’Connor said Thursday.

The Atlanta Journal Constitution reported Wesley Wise was arrested Wednesday on charges of first-degree arson, cocaine trafficking, possession of marijuana with intent to distribute and possession of a firearm by a convicted felon, jail records show.

Quinton Wise was arrested Thursday on one count of first-degree arson.

The motive for setting the blaze, O’Connor told reporters, was that the Wise brothers didn’t want a cop living near their “trap house.”

“Anyone that messes with an Atlanta police officer or a member of any portion of our team, there will be a reckoning for that and that reckoning just occurred,” O’Connor said. “We never stopped working on this case.”

Moreover, investigators have linked the brothers to a January fire at another neighbor’s home on Betsy Avenue, O’Connor said. That neighbor was not an officer, but police believe the brothers had an issue with the woman who lived there, he said.

“These two brothers basically ran the entire street,” O’Connor said, adding the two had a sizable drug operation. “People were afraid to tell on them.” 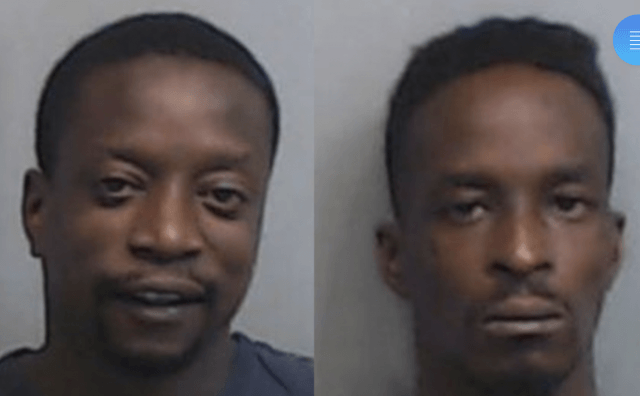 Wesley Wise (left) and Quinton Wise are accused of orchestrating the firebombing of a police officer’s home. (Fulton County Sheriff’s Office via AJC)

Authorities caught a break in the case when they were flooded with anonymous tips last month after increasing the reward for information in both arson cases to $23,000.

Although the Wise brothers aren’t accused of actually setting the fires, they’re charged with first-degree arson for reportedly paying others to do it, AJC reported.

“There was a crackhead that was basically paid with $100 of crack and $50 cash and he agreed, in the officer’s home, to throw a Molotov cocktail through the window,” O’Connor said.

Atlanta firefighters said the home would have been completely destroyed had they not quickly extinguished the blaze before it spread.

Wesley Wise was arrested during a narcotics raid, which led to the seizure of 150 grams of crack, police said.

“Because we were over there investigating these arsons, we figured out what the motive was behind them and then we developed information about how that house was being run,” O’Connor said. “With that information we were able to conduct a search warrant and then we kind of got lucky that Wesley was there.”

Both Wesley and Quinton Wise remain at the Fulton County Jail without bond, records show. Police said they have also identified the person who set the fire, but authorities have not released the suspect’s name because an arrest has not been issued.